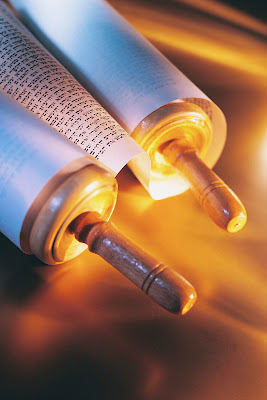 אַתָּה בְחַרְתָּנוּ מִכָּל הָעַמִּים, אָהַבְתָּ אוֹתָנוּ, וְרָצִיתָ בָּנוּ, וְרוֹמַמְתָּנוּ מִכָּל הַלְשׁוֹנוֹת, וְקִדַּשְׁתָּנוּ בְּמִצְוֹתֶיךָ. וְקֵרַבְתָּנוּ מַלְכֵּנוּ לַעֲבוֹדָתֶךָ, וְשִׁמְךָ הַגָּדוֹל וְהַקָּדוֹשׁ עָלֵינוּ קָרָאתָ
"You have chosen us from all the nations; You loved us and found favor in us; And exalted us above all the languages, and You sanctified us with Your commandments. You brought us close, our King, to Your service and proclaimed Your great and holy Name upon us." (Shmoneh Esreh for Yom Tov)
"You have chosen us from all the nations..." A famous Medrash speaks of how Hashem offered the Torah to all the other nations before offering it to Klal Yisrael. As the Medrash goes, when Hashem offered it to each nation, they each replied "What's in it?" and Hashem responded with the one Mitzvah that that nation has trouble with. When Hashem offered it to Esav, for example, Hashem said that you can't murder, and that's what Esav is all about! When Hashem offered the Torah to Yishmael, Hashem said you can't steal, and that's what they do for fun! etc. etc. But When the Torah was offered to us, Hashem didn't say "You can't speak lashon hara" or any of the other major problems plaguing our nation today, he offered it and we accepted it. So why is that fair? Why does it seem that Hashem tried to avoid giving the Torah to all the other nations, but willingly gave it to us? There are many answers to this Q but the one that really hit home for me was this one: When Hashem offers you something, its gold! There's no need to ask questions! Maybe its not right for you?...impossible! Hashem would only give us the best of the best, He's Kulo Tov(completely good)! So when the other nations responded "What's in it" they were demonstrating their lack of trust in G-d. They were expressing their misunderstanding of the reality that G-d is The Man. Once they asked that question Hashem knew that the Torah wasn't for them. So He told them "Yeah you prob wouldn't want it anyway, you'll have to change yourself and work hard according to the restrictions that come with it..." But Klal Yisrael knew the deal. Hashem offered us the Torah and we responded "Naaseh V'nishma." "We will do and we will listen" We didn't even need to know whats in it, because we knew its for sure whats best for us. And that's why we were zoche (merited) to get it, because we knew the emes. We knew and still know today that G-d gives us only the best, never anything less.
~
(Pic courtesy of CAJE)
Posted by CR at 4:51 PM

Absolutely beautiful! Thank you. I will most definitely carry this message with me into the holidays.

Beautiful as always! Keep on doing what you're doing. When you get a chance, can you get a song clip for this one?, it's been going through my head!!

PS. Give me a call sometime!

I just came upon this in a Google search, and I'm ecstatic! Thank you so much for going through the time to put all of this together and making my Yom Tov and Kum Zitsim all the more meaningful!

https://www.youtube.com/watch?v=5JWD7sBPUl8
by the lubavitcher rebbe