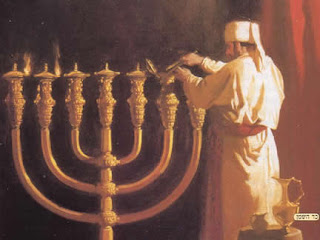 יְוָנִים נִקְבְּצוּ עָלַי אֲזַי בִּימֵי חַשְׁמַנִּים, וּפָרְצוּ חוֹמוֹת מִגְדָּלַי וְטִמְּאוּ כָּל הַשְּׁמַנִים. וּמִנּוֹתַר קַנְקַנִּים נַעֲשָׂה נֵס לַשּׁוֹשַׁנִּים, בְּנֵי בִינָה יְמֵי שְׁמוֹנָה קָבְעוּ שִׁיר וּרְנָנִים
“The Greeks gathered against me, then in the days of the noble ones [the Chashmona’im]. They breached the walls of my towers and defiled all the oils. But from the one remnant of the flasks a miracle was wrought for the roses [Bnei Yisrael]. Men of insight – eight days they established for song and jubilation.” (Maoz Tzur)
The Kedushas Levi, Reb Levi Yitzchak Mi’Barditchav, asks an intriguing question: What's the reason that Chazal established an obligation for us to light Neiros Channukah for these 8 days-corresponding to the neis (Miracle) of the Menorah that occurred back in the day? Why don’t we have the same thing by other nissim that we’ve had- like by Pesach and Purim? Why aren’t we told to do some type of Mitzvah with water on the 7th night of Pesach , since that night was Kriyas Yam Suf (The splitting of the sea)? Or some Mitzvah with wood (eitz) on Purim for the neis of the hanging of Haman (al ha’eitz)? And the things we DO commemorate on Pesach weren’t even for nissim! The Maror is for the bitterness of our experience as slaves in Egypt; the Matzah is a sign of our freedom; since we left so quickly, the dough didn’t have time to rise…! So what's the chiluk (distinguishing factor) between the neis of Chanukah, for which we have a specific commemoration. And other nissim of Yom Tov, for which there is no obligatory commemoration?The answer he gives is moradik (awesome)! The other nissim done for Klal Yisrael were done for the purpose of saving us. Those nissim were the vehicle through which Hashem took us out of Mitzrayim, and saved us from being wiped out by Haman harasha. But the neis of the oil was more special (so special that there is an obligatory practice of lighting candles to commemorate it, and we even daven a full Hallel!). Through this neis we were given a glimpse of how much Hashem cherishes our efforts in serving Him, in our observance of His Mitzvos. The explanation is like this: The Halacha is that if someone is an oness (something out of his control impedes his ability to

perform a certain mitzvah) he is pattur from doing that Mitzvah. The Gemarah in Brachos even says that if he thought about doing the Mitzvah, and then something prevented him from doing it, it’s as if he actually did it! So once the one day worth of oil they found was used up, they were pattur from the Mitzvah! And still, Hashem made a neis and had the oil last for another 7 days- This is a clear showing of the chiba (preciousness) Hashem feels (kevayachol) towards his children’s avoda (service). The Miracle of the oil wasn’t necessary- it was totally extra- an expression of love.
~
(Top pic courtesy of ChabadTalk.com)
(Bottom pic courtesy of AishAudio.com)
Posted by CR at 7:45 PM

I shall transliterate it:

'shkoyach! I was wandering around in cyber space looking for a rendition of "amar rabbi akiva" when I came upon this wonderful site. And wonderful it is. I loved playing the clips and remembered where I had heard them last. I had a pleasant time of it. Then I looked for your most recent posting and found it with the y'vanim nikbatsu text, but I found no place to click to hear a clip. What am I missing?